Beware, this will be a very positive review. I’ll start off with that as a warning. Last week, my housemates and I went to the cinema and saw The Guernsey Literary and Potato Peel Pie Society. Beyond noting that it was practically a Downton Abbey reunion, I didn’t know much about the film, or the plot. I knew it was about letters, postwar, and Guernsey. That was it. I came out extremely emotional. I absolutely loved it. I came home, climbed into bed and ordered a copy on amazon because I was desperate to see how the book compared.

I have a bit of a rule about movie covers – usually they are a massive no even if I’ve seen the movie first – I like neutral covers, covers designed with the book in mind, not the film. However, the movie cover for this arrived the day after, the non-movie cover would have been over a week and double the price. I was far too impatient for that. So the movie cover arrived Friday, I started it before bed. As much as I loved the film, I went into the book with extremely moderate expectations – I loved Hidden Figures, I found the book really hard going. I loved Arrival, the Ted Chiang book was DNFed. So, my expectations were adjusted accordingly. Movie cover or not, I had a lot of fun with the book photo for this (I even wrote out one of Juliet’s letters) 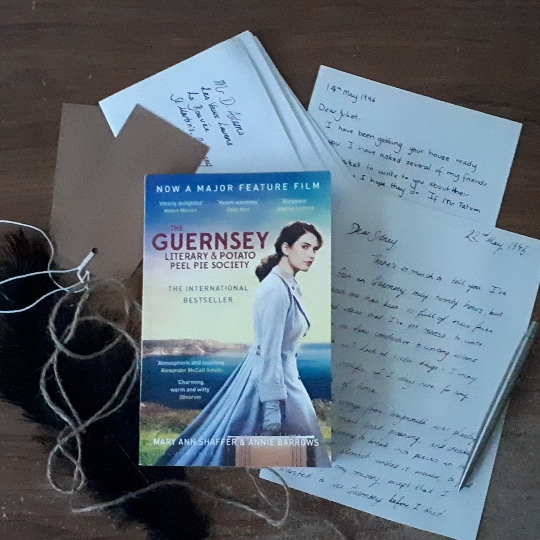 The book is a series of correspondence between a multitude of people, mostly from Juliet Ashton, a war-time columnist with writers block after the war. Her publisher, Sidney, is a great friend of hers, practically an older brother and the book starts with letters between Juliet, Sidney and publicist Susan on Juliet’s book tour around England. Upon her return, Juliet is being enticed by Mark Reynolds, an American Publisher, and she is corresponding with the Guernsey Literary and Potato Peel Pie Society, after Dawsey Adams asked for assistance in finding a book. Her correspondence with the society lead her to Guernsey and to the society itself. The rest, they say, is history.

Quite frankly, I wasn’t too sure about the structure. I wasn’t sure I’d be able to get into a book which consists entirely of letters. Letters rank slightly above diary entries in my opinion, but they’re still harder to get a feel for character. Unless the letters are really well done, and each letter has a specific style, voice and audience which makes it believable. This book succeeds in that. Several letters in, and this happens:

Don’t believe the newspaper reports. Juliet was not arrested and taken away in handcuffs. She was merely reproved by one of Bradford’s constables, and he could barely keep a straight face.
She did throw a teapot at Gilly Gilbert’s head, but don’t believe his claim that she scolded him; the tea was cold.”

Letter from Susan Scott to Sidney (about Juliet) – p16

I think this is the moment I fell in love with the character of Juliet. She starts off a little slowly, but soon you have to keep up with the multiple correspondence, gleaning bits of information from different perspectives about the war, the people, the friendships being built. It was amazing. I laughed out loud so many times, there were such fabulous lines in some of the letters. I’m going to turn some of these into book plates and pin them around my room.

These are some of my favourites from the first ten pages alone:

“I don’t want to be married for the sake of being married. I can’t think of anything lonelier than spending the rest of my life with someone I can’t talk to, or worse, someone I can’t be silent with.”

from Juliet to Dawsey Adams – page 10

So, characterisation is really good, and shown through the letters people write, but also what others write about them. This isn’t just a book from Juliet to Sidney, or Juliet to Dawsey. It’s Juliet to Sidney, Sidney to his sister Sophie, Susan to Sidney or Juliet, Dawsey to Juliet, Isola to Juliet ect. It’s a web of relationships. I loved how you don’t just see one side of it, in seeing the correspondence between Isola and Sidney, you see their friendship independent of Juliet and each letter details a different experience of the war. It’s far better than just having a book with a single main character, because it shows lived experience of the war, not someone’s interpretation of it (I know it’s fiction, don’t worry). It reminds me of A-level English lit, studying The Great Gatsby and using the argument that direct speech is more reliable that Nick’s narrative voice, because it’s an own voice interpretation.

This is a romance, but I think it’s Juliet falling in love with a group of people, and finding a home more than finding a specific romantic partner. I mean, it’s that too, but it felt more about friendship and trust and telling the right story – and love is a part of that. Kit is adorable, Juliet can be irritating, Sidney is just great, Isola is amazing, Dawsey is just so … Dawsey and the rest, they are all just wonderful. This is just my opinion. Everyone is well done, and I love them.

I just… I finished the book, and I just had to hold it closed for a few seconds while I processed. I really did love it, truly. I loved it so much, I flipped to the front and wrote myself a note. Next time I read, I’m taking a pencil and making notes in the margin like Juliet does with every book she can get her hands on. This book, movie cover or not, is now mine forever. No regrets.

I want to go and see the movie again now I’ve read the book. They’re very different, but in ways that work and I love them both. I wasn’t expecting to love the book as much as I do, but it was wonderful.

Just popping off to see, draw and experience new places and new skies! Probably read a few books along the way, do some knitting. You know. Adventures :) Currently still in the UK. View all posts by Wandering Bea