This month, I have been crazily on fire with my TBR list! I mean, ok, yes, I bought more I wasn’t reading off my shelf but I read nine novels this month! NINE. Last month I only read textbooks and I must admit I should have been reading textbooks this month as well… (awks). So, here is my May wrap up!

Mrs Dalloway meets Judy Blume: A Saturday in the life of Adam Thorne, a gay teenager in a very religious family. A huge day, with everything going wrong and everything somehow going right.

A phenomenal book about accepting yourself and sexuality and moving on with life.

The Raven Boys by Maggie Stiefvater 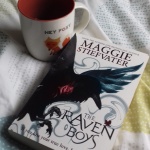 Blue knows that when she kisses her true love, he will die. But that’s ok, she isn’t interested in boys, especially the Raven Boys, the fancy private school idiots. Until she sees her first ghost walking the ley lines. There are only two reasons a non-seer can see a soul on St Marks Eve: she’s his true love, or she’s going to kill him. Something is stirring.

Pretty predictable YA book about romance and belonging and friendship, but paranormal with seers, ley lines, magic and ravens. Curious to see how the series progresses but not desperate.

A Darker Shade of Magic by V.E.Schwab

Parallel Londons, each with a different amount of magic. And only a few with the power to walk between the worlds. Kell lives in Red London, where magic and humanity live in balance, and he is one of the few with the ability to cross between White, Red and Grey London. Kell and Grey London thief Lila have a race against magic to restore balance to the worlds.

To say I loved this would be an understatement. I adored it. I couldn’t read it quickly enough and I couldn’t buy the sequel fast enough. I love the characters, I love the world, I loved every single part of this book. It was genuinely exciting to read.

The Girl Between by Laekan Zea Kemp

About a girl with Sleeping Beauty Syndrome who travels to a world made of her memories while she sleeps. Everything is normal until one day a boy washes up on the shore, a boy she has never met before with no idea who he is.

It was ok. Bit dull and a bit predictable but ok.

Eleanor and Park by Rainbow Rowell

Eleanor is the new girl at school. She doesn’t even try to fit in. On her first day she sits next to Park on the bus and every day after that. They start sharing comics, music and fall in love. But nothing is good in Eleanor’s home and she is terrified she will lose the only good thing in her life.

The first half is fairly meh but then halfway through it becomes so-good-can’t-put-down. Switches between Eleanor and Park’s point of view. Set in the 80’s and lots of cultural references.

Aristotle is an angry teenager, his mother is afraid he will join a gang like other angry Mexican teenagers. Instead Aristotle meets Dante, a curious soul opposite to Ari in every way. They form a friendship that changes lives, and Ari has to learn to accept things about himself.

Excellent – beautiful book! It may not have had monsters and fairies and magic but this was beautiful and I really appreciate it.

Yelena is given two choices: die for her crimes, or become the Commander of Ixia’s new poison taster. She chooses life. And in doing so becomes embroiled in a plot, learning about magic, secrets, friendship and loyalty in a fight for survival.

I first read this as a teenager, and loved it even more reading it now. Yelena is awesome. Will always recommend this series.

The world is split into Silvers and Reds. The Silvers have magical powers and rule over the powerless Reds. Mare is a Red thief, who accidently proves to be more powerful than the Silvers. They hide her in plain sight, declaring her a long lost Silver princess. Mare has to navigate the perils of the Silver court, hiding her red blood, and trying to take them down from the inside.

It seemed like such a good idea, but it was all very formulaic, very predictable and very heteronormative. Love triangles, rebellion, power. I was expecting it to be more exciting but it was just kinda meh. Nice cover though.

A Gathering of Shadows (Book 2: Shades of Magic) by V.E.Schwab

Four months after the events of a Darker Shade of Magic, Kell is still trying to pick up the pieces of his life while shutting down thoughts of Lila and trying to stop his nightmares. Lila is enjoying life as a pirate in the Red world, learning magic. But something is stirring in White London, drawing Lila back to Red London and to the Element Games.

The first one was amazing, this one was equally so. I love Lila so much, even if her morality is crazy grey. I love the world, and the politics and learning about different aspects of the world beyond the court Kell belongs to. Can’t wait for the third one!

It’s been a very good reading month! Favourite read has definitely been the Shades of Magic series. Alas, revising my goal for next month to five in acknowledgement of the 15000 word dissertation I have been trying to write!

Just popping off to see, draw and experience new places and new skies! Probably read a few books along the way, do some knitting. You know. Adventures :) Currently still in the UK. View all posts by Wandering Bea